Made by CASE digital studio
Lost 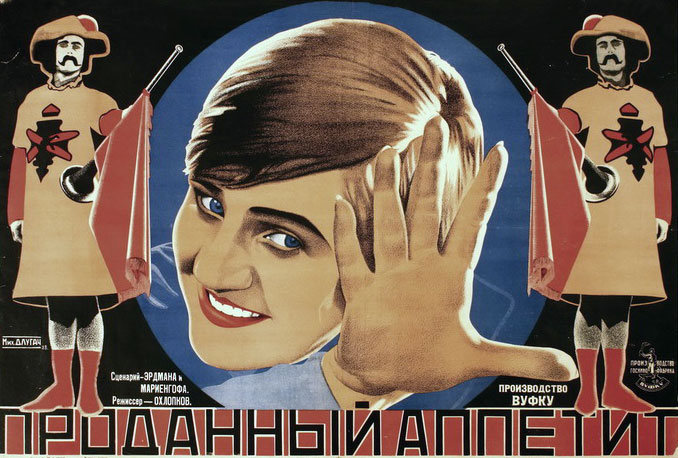 The film is based on Paul Lafargue’s pamphlet Sold Appetite. The millionaire feels terrible because he ate too much, and his stomach cannot digest the food. The scholar, whom he hires, finds a surgical method to separate the process of food saturation from its digestion. They just need to find a person who is ready to have a surgery on their healthy stomach. Following persistent persuasion, a starving unemployed driver Emil agrees. The surgery is done. Then, the millionaire is able to eat a huge amount of food. Why not, if it is the unemployed Emil who will suffer from overeating now…

The film is lost.

“… Buchma’s fourth film in 1928 was Sold Appetite by the director N. Okhlopkov…

He then became friends with Nikolay Okhlopkov. They were always happy to meet each other. During the shooting in Kyiv, Buchma did not only demonstrate his fantastic acting while playing poor Emil who sold his appetite to a fat bourgeois, but also performed stunts: he jumped from the second floor into the car riding through the gate, performed a handstand on a handrail on the seventh floor (at the hotel in Volodymyrska St., 36), broke a big shop window with delicacies. At that time, there was no safe glass. Usual glass was broken. And after this shooting, Buchma felt acute pain in his stomach. In panic, everyone decided that he had swallowed a piece of glass, having opened his mouth too wide during a blow. They laughed a lot later, when it turned out that a piece of gummosis, a special paste the artist had used for modelling his nose, glued the hair on his stomach.

Having found out about Buchma’s stunts (despite an injury of his left leg during World War I), … VUFKU director, Pavlo Nechesa, sent a thundering telegram to Kyiv forbidding artists to perform anything that would threaten their life. Perhaps, professional stunt performance appeared in Ukrainian filmmaking following this event.

In the meantime, a black car drove near the Opera House, and the driver jumped out of it (though not at full speed). It was Buchma shot in another take of Sold Appetite… When recalling the film which impressed him, the famous director Serhii Yutkevych wrote in the journal Iskusstvo Kino in 1980, “Okhlopkov was close to Les Kurbas’s creative method (it had a lot in common with Meyerhold), and Buchma attracted him with both his unusual appearance, and a meaningful glance of his eyes …captured by internal fire and resembling Pablo Picasso’s eyes, and his face sculpture, his muscled trained body, but also with what later was named ‘personality,’ due to which his appearance on screen was always so important.”