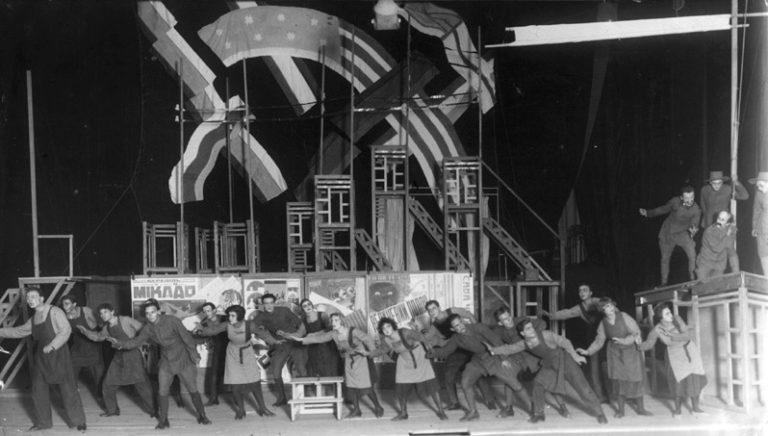 Installation based on Les Kurbas’ production of Jimmy Higgins

VUFKU actors came mainly from professional and amateur theatres. Les Kurbas‘ experimental Berezil theatre had the biggest impact on the Ukrainian cinema of the 1920s.

One of the most notable Berezil productions was the performance Jimmy Higgins, in which Kurbas first used cinema as part of the stage reality: the chronicle of World War I and shots that reflected protagonists’ inner experiences, dreams and fears, were projected to the canvas screen.

Amvrosii Buchma played the leading role in the production of 1923. Five years later he, a real film star by that time, played Jimmy again, this time in Heorhii Tasin’s film of the same name, only one part of which has survived. This very fragment is projected to the canvas screen.

You see the key scene from Jimmy Higgins production. In the foreground, there are silhouettes of the leading Berezil actors, whose images were best represented in the film. Fortunately, thanks to the saved VUFKU films, even today we can see the actors’ typical gestures and artistic techniques.

Berezil’s signature were the scenery and costumes created by such starry artists as Vadym Meller, Anatol Petrytskyi, Maia Symashkevych