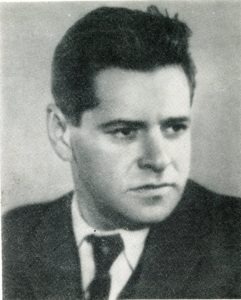 Oleksii (Lazar) Kapler was a Ukrainian Sovier playwright and director. He was born in Kyiv in the family of the wealthy owner of Kyiv Kapler (Moscow) baths that were situated in a building next to the present-day Zhovten cinema. Since childhood he was fond of cinema and was a member of Kyiv Variety Theatre.

In the 1920s, together with Yutkevych, Kozintsev and Trauberg, he created Harlequin theatre in Kyiv. He was also a member and a co-founder of the famous FEKS (Factory of Eccentric Actor).

In 1927, he assisted Oleksandr Dovzhenko at the shooting of Arsenal. He directed three films, the most famous of them is The Right to a Woman (1930), which told a story of a young woman who left her husband and with her small child went to the city to study at the medical university.

Kapler wrote the script together with the editor of Kino journal, poet Mykola Bazhan, and the leading role was played by the director’s first wife Tetiana Zlatohorova who was later purged and killed.

However, Kapler could enjoy the greatest glory after the films Lenin in October (Ленін у жовтні) (1937) and Lenin in 1918 (Ленін у 1918 році) (1939) where he co-authored scripts with Tetiana Zlatohorova.

In 1942, thirty-nine-year-old Kapler met Stalin’s daughter Svitlana. Their romantic affair made ‘Vozhd’ so angry that a year after Kapler was arrested and sentenced to five years of prison for anti-Soviet propaganda.

When released in 1948, he, despite prohibition, came to Moscow. He was arrested again and sent to a forced labour camp in Inta (Komi ASSR). He was released only after Stalin’s death in 1953, and the following year he was fully rehabilitated.

After that Kapler resumed his work as a scriptwriter, and he created scripts to extremely popular films Striped Trip and Amphibian Man. From 1966 to 1972, he was a constant presenter of Kinopanorama, a TV program that was demonstrated on the central TV. This made Oleksii Kapler one of the most popular Soviet TV celebrities.