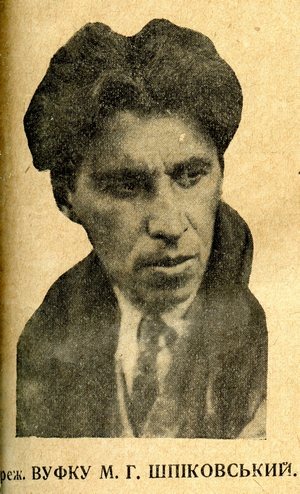 Mykola Shpykovskyi was a Ukrainian director, well known both in the Soviet Ukraine and in Russia in the 1920s, the author of one of the most successful Ukrainian comedieas Self-Seeker (1929), which was reviewed by Osip Mandelstam, and the long forgotten avant-garde film Bread (1930).

He was born in Bila Tserkva (according to different sources – in Kyiv) and studied in Odesa, where in 1917, he graduated from the Faculty of Law of the Imperial Novorossiysk University.  Like most filmmakers of that time, Shpykovskyi was trained to become a director.

Having taken to filmmaking, he started writing articles and notes to specialised media, in particular to Kino-Gazeta, and soon he became the chief editor of the journal Radianskyi Ekran.

In 1925, Shpykovskyi wrote the script and filmed the comedy Chess Fever at Mezhrabpom-Rus studio, co-directed with a future Soviet cinema classic Vsevolod Pudovkin. The film about the events of Moscow chess tournament, starring the Cuban champion José Raúl Capablanca, was extremely popular among the audience.

Having directed one more comedy A Cup of Tea (1927) at Mezhrabrom-Rus, Shpykovskyi returned to Ukraine and almost immediately began to finalise Three Rooms with a Kitchen (1928), a comedy devoted to the struggle with petty bourgeoisie in everyday life, scripted by Solomon Lazurin who had been inspired with Vladimir Mayakovsky’s script How Are the Things? (Як справи?).

In 1929, Shpykovskyi started to work on the screen version of the short novel Tsybala by the famous Ukrainian writer Vadym Okhremenko, a friend of Maksym Rylskyi.

According to the plot of this comic and unusual for Soviet cinematic production genre of road-movie Self-Seeker, the philistine Apolon Shmyguiev found himself in turns with the Reds, with the Whites, and the Anarchists. The only constant things of this tour were self-interests of the protagonist, and the camel that he rode around Ukraine.

The audience and non-partisan bureaucrats admired Self-Seeker.  Eventually, the film was accused of disgrace of the Red Army and was banned for demonstration.

Turning to the momentary topic of collectivisation, he obviously tried to redeem ideological ‘mismatch’ of his previous film, so he made the propaganda film Bread. The film, which critics compared to Dovzhenko’s Earth, was released but was not very popular. Bread was not screened beyond the Soviet Ukraine. For instance, the Russian Main Repertoire Committee banned the film “as a typical specimen of abstract and speculative cinema.”

The release of the new film by Shpykovskyi Hegemon marked the opening of Kyiv cinema Zhovten on 29 January 1931.

Later Shpykovskyi came to Moscow and focused on scriptwriting. During World War II, he worked as an editor of the front-line department of the Central Newsreel Studio.