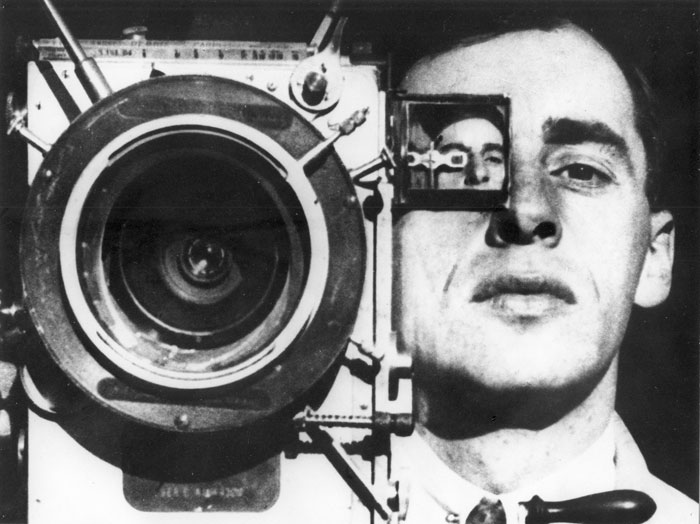 Mikhail (Moisei) Kaufman was a cameraman, documentary director, photographer and inventor, a member of the “Kinoks” group, the brother of the director David Kaufman, better known as Dziga Vertov, and the cameraman and émigré director Borys Kaufman.

He was born in Bialystok, on the territory of the present-day Poland, in a family of Jewish intelligentsia.  He was fond of technical devices and photography since his young age.

In 1914, fleeing from the threats of World War I, the Kaufmans moved to Kyiv, and then to Mohylov.  Later, the brothers moved to Moscow.  Both of them welcomed the October Revolution with enthusiasm.

Since 1918, the elder brother, Dziga Vertov, had been shooting newsreel and propaganda films, and became one of the founders of the Soviet film propaganda. He would travel with agit-trains a lot.

In 1919, in cooperation with some associates, i.e. Oleksandr Rodchenko and his wife to be, editor, Elizaveta Svilova, he created the group “Kinoks.”  His younger brother Mikhail Kaufman was doing military service in the Red Army then.

In 1922, when the Civil war finished, invited by Dziga Vertov, he became an employee of the All-Russian Photo- and Cinematic Department and joined the Kinoks. For his camerawork, Mikhail Kaufman remade and perfected some cameras, and invented new mechanical and optical devices which enabled him to implement new shooting methods, e.g. “sudden life capture.”

By the late 1920s, Kaufman and his brother had made a number of films that visualised the slogans of the Kinoks’s manifesto.

During this period, as a co-author and cameraman, he shot such films as The Lawsuit of the Socialists-Revolutionaries (Процес есерів) (1922), Cine-Eye (1924), The Sixth Part of the World (Шоста частина світу) (1926).

In the late 1920s, the struggle with formalism burst out in Russia, and the Kaufman brothers were fired from Sovkino for cost overrun and unwillingness to apply for the script approval.

They accepted VUFKU invitation and in 1927 moved to work in Ukraine, where, thanks to Mykola Skrypnyk’s policy, the artists had even more freedom.

At VUFKU studios they made their most famous films, The Eleventh Year (1928) and Man with a Movie Camera (1929).  However, while making the last film, the brothers had a conflict and their creative alliance broke up.

Mikhail Kaufman continued to shoot films at VUFKU, and he was the inventor, director and cameraman of one of the most lyrical films about Kyiv In Spring (1929). It is in this film that the hidden camera and other advanced shooting techniques were used for the first time in Ukrainian cinema.

The film became his personal filmmaking manifesto and expressed his concepts of cinema which he later explained in his article Kino-analysis (published in Nova generatsiia journal).

While Vertov was criticised for mechanistisity and love for machines, due to this film, Kaufman was blamed for biologism.

He made only one film afterwards, An Unprecedented Campaign (1931), which demonstrated the advancement of collectivisation right before the tragedy of Holodomor.

In 1932, Kaufman faced a tragedy in his personal life: his partner, an Italian woman Gabriel, with whom he lived despite the dangers of ‘having contacts with foreigners’, and their common daughter disappeared under suspicious circumstances.

They managed to find the half-conscious girl, but she died shortly afterwards. Kaufman could not find out anything about the destiny of his loved wife till the end of his life. After this dramatic story he returned to Russia and shot several dozens of films of various documentary genres. However, he always considered his early works, both single-authored and co-authored with his brother, the most successful in his filmmaking career.