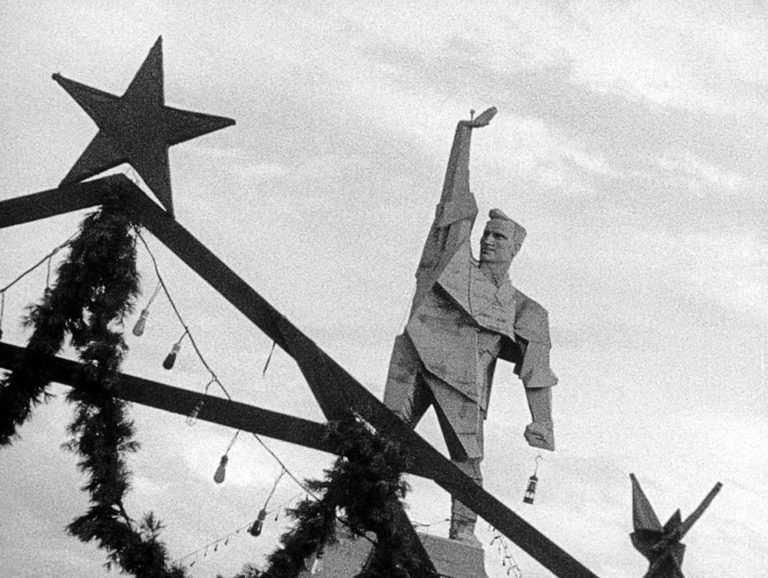 This zone introduces the viewers to the most radical film experiments of the 1920s, which were carried out at VUFKU by Dziga Vertov, Ivan Kavaleridze, and Oleksandr Dovzhenko. Each of them used a specific montage rhythm – from vibrating and impulsive (Vertov) to slow and smooth (Dovzhenko) to idle and quiet (almost motionless – Kavaleridze).

Justifying his theoretical views, Vertov urged filmmakers to leave the “crutches” of theatre and literature and to work on the creation of a universal film language, understandable on every continent. Staying of Vertov and Kinoks in Ukraine allowed him to achieve his creative ambitions: to make a film without titles, to create a sound film, to “emancipate the movie camera.” During his more than four-year work in Ukraine, Vertov created his three most avant-garde films, The Eleventh Year (1928), Man With a Movie Camera (1929), and Enthusiasm: The Symphony of Donbass (1930).

Another VUFKU film, which shocked the audience and garnered heavy criticism, was Ivan Kavaleridze’s début film Downpour (1929). Kavalerize tried to bring the statics and monumentalism of a sculpture into cinema. However, neither Downpour, nor Kaveleridze’s legendary Constructivism monument to Artem in Bakhmut have survived to this day. There are around 20 shots from the first one, and the impression of the second one can be made based on the photos and several fragments from newsreel and two films of 1930, Kavaleridze’s Perekop and Vertov’s Enthusiasm.

Oleksandr Dovzhenko worked on the Constructivist combination of avant-garde’s two extreme points – dynamics and statics (especially in Arsenal (1929)). In his films (Zvenyhora (1927), Earth (1930)), Dovzhenko used his unique manner to combine rhythmic associative montage, innovative techniques in the style of German expressionism with frozen close-ups caught by the “prepared” optics of the cameraman and photographer Danylo Demutskyi.