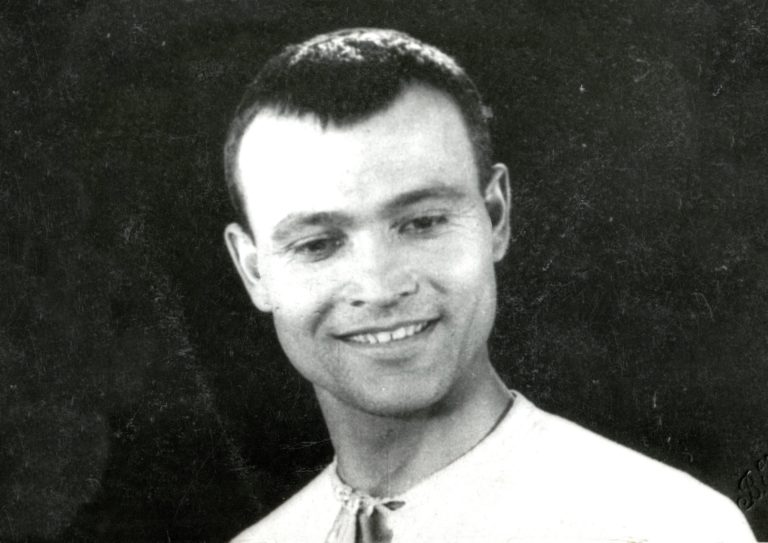 Hryhorii Dovzhenko (1899-1980) was a Boichukist and a sculptor of monuments, and during the 1920s he was also a film artist.

He was born in Poltavka (now Bashtanka), Mykolaiv region, in a family with many children. In search of a better life after the Stolypin reform, the Dovzhenko family moved to Akmolin (now Omsk) region to work on virgin lands. As a child, Hryhorii worked as a loader and gatekeeper, though he did want to study. In 1916-1917, he learned the skills of painting in oils from the Itinerants Yu. Kurtukov and V. Volkov. In 1921, the Dovzhenko family returned to Bashtanka, and Hryhorii entered the Art Institute in Odesa where he studied at the studio of the artist and professor Danylo Krainiev, and later at his colleague H. Komar. Visiting Kyiv, Dovzhenko was interested in the works of Mykhailo Boichuk’s studio at Kyiv Art Institute.

In 1927, Hryhorii Dovzhenko and H. Komar painted the Eastern Chamber of Commerce in Odesa, and next year, together with a group of artists, he painted the Farmers’ Sanatorium of the All-Ukrainian Central Executive Committee in Khadzhibey Estuary, and in 1929, it was Mykhailo Kotsiubynskyi Press House in Odesa. After graduation, Hryhorii Dovzhenko started to work at the First Film Studio VUFKU in Odesa, where he got acquainted and became friends with Ivan Kavaleridze and Oleksandr Dovzhenko.

He was involved in filmmaking. In the film Museum Guard (1930), the 31-year-old Dovzhenko assisted Yosyp Shpinel who was seven years older than him, and played a secondary role of a Red Army soldier. At the same time, Dovzhenko also worked as an artist for the kulturfilm For Woman About a Woman (1930), the propaganda film Twenty-Five Thousand (1930), Ivan Kavaeridze’s epic film Perekop (1930), and the drama Право батьків (1931).

In 1930, Hryhorii was invited to teach painting at the Faculty of Architecture of Kyiv Art Institute, where he worked until 1936 when he was fired.

During World War II, Dovzhenko was in evacuation in Tajikistan. In 1945, the artist returned to Kyiv and began working at the newly created Institute of Monumental Painting and Sculpture at the Academy of Architecture of the Ukrainian SSR, and he worked with monumental forms more and more often. One of Hryhorii Dovzhenko’s most famous works is the monumental mosaic Kyi, Shchek, Khoryv and their sister Lybid on the façade of the cinema Rovesnyk (1971, later the Puppet Theatre).